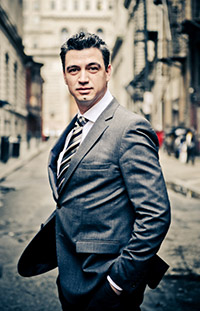 Cristian David is Vice President and Brokerage Manager of the Sotheby’s International Realty – Pacific Palisades and Santa Monica/Venice brokerages, managing well over 80 agents affiliated with these two offices. Cristian has been managing real estate agents for over a decade. He started out as an agent himself in Philadelphia where he quickly climbed to the top 1% of producing agents selling well over $32M in his first 14 months in the business. His primary focus was new development, luxury homes and condominiums, and investment properties. Cristian’s avid taste for sales established him in the community as an agent who focused primarily on building strong relationships among his peers.

In 2007, Cristian joined Keller Williams Realty International and launched the company’s Center City-Philadelphia office. As an award-winning manager, Cristian strengthened his reputation as a strong relationship-based recruiter by attracting top-level quality agents to the firm. He was able to do so through his effective coaching on real estate negotiation skills, high-performance productivity-based techniques and team-building/development strategies.

Cristian studied performing arts management at CUNY in New York. While in New York City, Cristian worked as Assistant to the General Counsel of the League of Resident Theatres after which he was offered the opportunity to manage several Broadway and off-Broadway theater companies. In Philadelphia, Cristian focused primarily on managing, marketing and public relations of a couple of local major resident theater companies, most recently Walnut Street Theater, the world’s most subscribed theater, where he broke subscriptions and box office record sales.

Cristian enjoys giving back to the community he works and lives in by donating his time and energy to several non-profit organizations that focus primarily on animal welfare, homelessness and children in poverty causes.

Something to say? Get in touch!